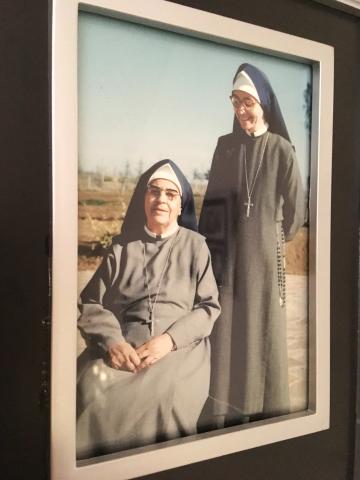 The Life of Sister Jane Gates

The oldest of eight children, Sister Jane was born on December 23, 1927, in Hamburg, New York.  Growing up during the time of the Great Depression instilled within her lifelong attributes of living responsibly and frugally and learning to make do with what one had. Not yet 18, she joined the Medical Mission Sisters in July 1945.

After making her first vows in August 1948, Sister Jane moved to Washington, DC to attend Trinity College for her B.S. in Chemistry, and then Georgetown University for her MD in 1955. She completed an internship and one-year surgical residency at Sacred Heart Hospital in Allentown, PA before leaving for mission in Ghana in 1957.

Serving as the Medical Director, Sister Jane was the first Sister-Doctor to work at the 100-bed Berekum Hospital in Ghana. She treated tens of thousands of patients; the pace was relentless and the challenges immense, the days long and emergencies took her into the night, but she faced the demands with both grace and courage. She became an excellent diagnostician without the use of sophisticated machines. She called herself a bush doctor and responded to the needs presented as best she could. It was in Berekum that the idea of bringing healthcare to the people who were distant from the hospital began.

In 1962, Sister Jane moved to Fort Portal, Uganda where she was named Virika Hospital’s first Medical Director after Medical Mission Sisters took over management of the hospital. She directed twice-weekly medical safaris to remote areas in Uganda. One such medical safari to Bwamba, provided 65,000 Baamba and Kakonjo tribal people with their only access to modern healthcare.  For Sister Jane this was an experience of looking beyond the limits of the institutional model to what would become community-based healthcare in another decade.

In 1967, Sister Jane attended the General Chapter of MMS in Rome as a delegate from Africa – she emerged as the first Superior General to follow the 40-year leadership of Founder Anna Dengel.  As she was two months short of the required canonical age of 40 years she had to be postulated and then receive permission from the Vatican. On her first morning as Superior General, when the community was gathered for breakfast, Anna Dengel raised her hand to begin the prayer. Sister Jane gently put her hand on Anna’s and said, “Mother, I will do this now.” Underneath her somewhat reserved exterior was a solid core of strength - a deep faith, abiding integrity, and a great love of the Society.

This solid core helped Sister Jane guide MMS through great changes after the Second Vatican Council.  She navigated the turbulent waters of upheaval, helped the next chapter work toward a statement of common purpose and paved the way for the Society to come to understand the work of justice as a work of healing.

Sister Jane oversaw the growth of healing mission into community development and public health work, as well as the turnover of several of MMS hospitals.  Although she did not practise medicine during her six-year term of office, her work gave her the opportunity of seeing and becoming familiar with healthcare delivery systems in many countries of the world.  Her competent enabling leadership from 1967 to 1973 aided the 700 MMS in reaching two their organisational goals: the turnover of several MMS hospitals to trained local personnel and the realisation of the philosophy of healing the whole person through growing emphasis on public health work, community development, social service and cooperation with local government and national health plans. She demonstrated how leadership can be a loving work of service.

Upon repatriating to the USA in 1973, Sister Jane took a refresher course at Medical College of Pennsylvania in Philadelphia and then moved to Lumpkin, GA, starting a new community with three other MMS. Although one Sister passed away while in Lumpkin, the three remaining Sisters (Sisters Jane, Eunice Cudzewicz and Pat Edelen) have remained together as community since that time.  In Lumpkin, Sister Jane opened a medical clinic and served as the only doctor in town and one of only three doctors in Stewart, Webster and Quitman Counties in Southwestern Georgia.

Although Sister Jane and the other MMS came to offer medical services and to be a presence of the Church, they soon realised that it was not the medical care so much as the quality of presence to one another and to the people that was the essence of their mission. Time and again, it was treating everyone with dignity, respect and equality that made an impact. The loving relationships developed there have lasted a lifetime.

The clinic was turned over in 1984 and the three Sisters moved back to Philadelphia, where Sister Jane served in various leadership positions, including Eastern District Coordinator and vocation discerner.  At the age of 78, she took a basic course in archives at the National Archives in Washington, D.C. and offered her fine organisational and administrative skills as the Archives Coordinator for North America. She continued in this position until she was 92.

Many people sought her out for advice, counsel and support in her later years, seeking her wisdom and compassion.  She was a good listener and had a deep care for others, offering sensitivity and encouragement to others to follow their hearts. Her life was marked by the fidelity to her call. Humble service to the Society was at the heart of her doing what was asked for the good of the whole. Community and communal prayer remained an important part of her life. The bonds of love and friendship forged with her community in the Lumpkin years continued for over forty years.

In the past several weeks, as she moved into her time of transition into eternal life, many individuals came to spend time with her to express their love, ask for a blessing, or simply sit in her presence as she slept.  She was “a pearl of great price:  a woman of strength and dignity.”

May she rest with joy in the loving arms of God!